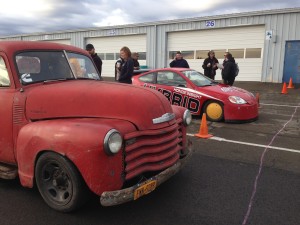 At the end of February, Bob Gillespie invited us to participate in the Toyota Green Grand Prix, which is held every year in Watkins Glen, NY. Initially, Kevin was reluctant to go. It’s 800 miles from home, which is a long (and expensive) road trip when you’re hauling a heavy car on a trailer behind your truck.

I’m not interested in racing as a spectator sport and I had no interest in racing until participating in the Automotive X Prize. Being on the track at Michigan International Speedway changed something in me, and I wasn’t aware of it until Bob offered us a chance to get back on a track. All drivers needed a navigator, and I called shotgun. Nick agreed to go, too, so team IMW registered for the event even though Seven was in the midst of some upgrades and was overdue for ordinary maintenance.

Kevin worked long hours to get the maintenance done (new wheels, tires, brakes, cv joints, axles, alignment, etc.) but he ran out of time to do anything else before he and Nick had to load Seven onto the trailer and haul us all out to NY on April 10.

If you’re not familiar with the Green Grand Prix, I’ll give you a quick overview. Ten years ago Bob Gillespie, a former school teacher, began this high-efficiency competition. His goal was to get students involved and have an event that was educational and fun. Anyone with a street-legal vehicle can participate. There are two stages to the competition. This year Stage 1 was a 100 mile fuel economy event on the short track at Watkins Glen International. Stage 2 was a 60+ mile fuel economy road rally on public roads. Both stages are run at highway speeds.

We figured 100 miles on the slightly hilly track would be no problem for Seven. Kevin drove about half of the laps and I was his navigator (timing the laps, keeping an eye out for other cars, reminding him of the reduced speed at the turns). Then we pulled into the pit and switched drivers. Nick finished the final half of Stage 1 and Kevin was his navigator. This gave me a chance to wander the pit and talk to people on other teams, answer questions about Seven, ask questions of my own about other peoples’ cars, and watch the teams of students at work when their cars pulled into the pit.

By our odometer, we drove 104 miles on the track. How did we go over the 100 miles? I hit the wrong button on my iPhone’s stopwatch app when we made our mandatory pit stop and zeroed out the number of laps we had completed and we weren’t sure how accurate the odometer in Seven is. Nick and Kevin just kept driving until the rest of the cars were flagged in.

Seven’s battery pack holds the equivalent of just under 1 gallon of gas. To make it easier for the event coordinators, Kevin told them to just count our pack as a full gallon — we’d take the difference as a handicap against us. At the end of Stage 1 Bob inspected our gauge and odometer, used his calculator and wrote down 198 MPGe.

Next was the Stage 2 road rally. We knew it would be tight. The weather was cold (batteries like it a lot warmer), rainy (we had to use electricity to run headlights, wiper and defrost), and we’d be driving over 70 miles in traffic on winding, hilly roads. Just how hilly we didn’t realize until we started. To flat-landers like us, the hills in the Watkins Glen area seem like mountains. But we had come over 800 miles to do this and decided to give it a shot. At worst, we’d call Nick to come get us with the truck and trailer.

Neither of us had participated in a road rally before and had never seen a tulip diagram. We weren’t familiar with the area and the tulip diagram directions said things like “turn right (dirt section).” Which dirt road? Half of the roads we passed seemed like gravel or dirt roads to us! That’s the point at which things started to fall apart. I missed the turn and had to navigate us back onto our route. We found the next check point, got our slip, and got back onto the road.

At that point it was already obvious something wasn’t right with Seven’s batteries. Our state of charge was dropping more rapidly than it should have, even given the challenging driving conditions. Kevin looked at the data from the Victron gauge and didn’t like what he saw. There had been no time to balance the batteries before the competition and we had put a lot of miles on them since the last time that was done (early 2011). There was a chance we had a bad cell in the pack. If we kept driving, we might damage the pack.

We pulled onto a gravel road near Sugar Hill and CR21 and stopped. Seven was at 11% state of charge. We had driven approximately 47 miles on the road rally and had about 24 miles to go. It wasn’t worth damaging the battery pack. We called Nick and some helpful volunteers gave him a map and showed him where to find us.

The upside of this: we had a lot of fun and Seven didn’t break. I would have liked more time to get to know the other cars and their drivers. There was a wide variety of vehicles competing and a lot of people as passionate about fuel economy as we are. 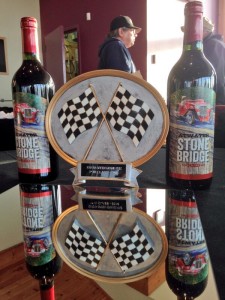 The downside: we left not knowing what Seven could really do on the road rally. Running quick numbers while we waiting for Nick to pick us up, Kevin estimated we were getting 140 MPGe before we had to stop.

In the end, we were awarded 1st in Class (Exhibition) and the judges declared we tied with the Urba Centurion for Most Fuel Efficient Vehicle.

Thank you to everyone involved in the Green Grand Prix, from event coordinators to participants and spectators. You’re a friendly bunch of passionate people and it’s great to see the many ways in which you’re working towards a more energy-efficient future for our transportation.