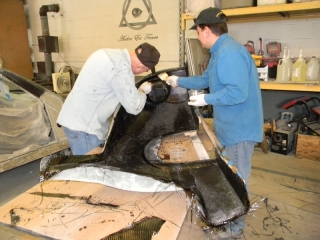 The rebuild of Seven’s body, once upon a time a ‘winter’ project, has been a very long haul…did I ever say which winter it was supposed to be??? We may finally be approaching the downhill side. This can be difficult to determine since I don’t know where the top of this particular proverbial hill is. Who knows? Reg does. Reg is, of course, our instructor, guide and composites expert who has been coming out to help and teach us how to rebuild Seven’s body with high performance composites. Since he works at about three times the speed of the rest of us combined, it’s been us trying to keep up and learn everything Reg has to teach while he does his magic. Doing is learning – anything else is academic B.S. — and we’ve been learning a lot.

The proof of my last statement has come in the times between Reg’s visits, when the IMW team has had to try and get enough done so it looks like we’ve actually been doing something before Reg’s next visit. Even though that gave us several months, making composite parts is an art and a new skill set we’re just developing. During Reg’s absence’s we learned to make molds of the body panels, doing our best to copy what he had shown us. Looking at all the pictures we had taken during Reg’s previous visits, and the occasional last minute paniced call to Reg for help while our epoxy was hardening in some misshapen blob, we followed Reg’s instructions, looked at pics when we weren’t sure, traded a few emails and…sometimes guessed on some of the minor things.

Reg had shown us many tricks and shortcuts for potential problem areas that could be addressed more easily in the cleanup of a mold or part instead of fighting an impossible battle while trying to make the piece. So, by following his way of laying up the parts and planning out the builds we got through them with minimal difficulty. The hardest part was having enough confidence in ourselves to just do it. We started with the small parts, making molds and followed up with fixing and prepping them so we’d be ready to make parts from the molds once Reg came for his next visit. We then worked our way up to making a few of the simpler parts, incorporating every technique we could each time so as to gain experience on the easier components with all the composites materials, e.g., carbon fiber, Kevlar, and honeycomb, so that when we actually needed to use these materials in the build of the more difficult to construct parts we’d already have some practice. It worked beautifully, not to mention having the added side effect of making the small parts WAY stronger and lighter then they ever needed to be. You know me: always overbuilding on the side of strength.

We’ve progressed from shaping the new car body, which we used as the plug for the molds, to making molds, to making composite body panels on our own — something we only daydreamed about just a year ago. And although it’s taken longer than expected and cost a few more ducketts to boot, when compared to a semester of college for an entire group of people, it’s been cheap and an educationally profitable endeavor.

That brings us to where we’re at now. The body panels have all been made and are ready to be fitted to the car and then we’re done. Right?? When I tell people at my day job at the Illinois EPA that we’ve finished the body panels the general response I get is something on the order of “that’s great! Now you only have to put them on the car and paint it and you’re done!” Yes and no. This is that part of the hill I’ve never been on, so I don’t know for sure what all is involved or how long it will take. If past experiences have taught me anything, it’s that projects always take much longer than expected. In fact, I think one way to define the word “project” is: ‘an endeavor undertaken with a defined outcome but no definable timeline.‘ You could also add to that ‘with an unknowable number of steps which lead to the desired outcome‘, thereby inferring the undefinable timeline. When applied to Seven and the work we have left on the body, I can give you the following outline of steps that I’m currently aware of. Reg, experience, and hindsight will allow me to more accurately fill it in at a later time, but for now, here we go:

Those are the steps I think we have to do yet to finish the car’s body. These include a bit of guesswork based on conversations I’ve had with Reg. Since I haven’t really done any of these steps yet I wont know how much work each step involves or how many steps I’m missing or how many steps will need to be added/modified to fit our particular build until I’ve done them. That’s were education through experience comes in. Reg is returning to IMW this Friday, March 22. I’ll pick him up at the ST Louis airport, and as usual, blindfold him for the trip to the secret IMW headquarters that we keep telling everybody is located in a cornfield near Springfield IL. Good luck finding it. I know I even get lost sometimes (probably should have taken a left at Albuquerque).

Reg will be here from March 22nd until April 8th, it’ll be another blitz to get as much done and learn as much as we can, so anyone who wants to help out and learn something to boot, drop me a line and I’ll give you directions. Or if you already know the way just come on out and help us finish the last 11 or 27 steps toward finishing Seven’s body makeover. And thanks! Cold drinks and Little Debbie Snack Cakes will be waiting in the shop fridge. Make sure you’re wearing some grubby clothes though, because if you’re not, you will be.

Hopefully I’ll have more details for everyone in a week or two. Until then, Audere Est Facere!

PrevPreviousOver The River and Through The Woods to NetGain Motors We Go.
NextAdler After Dark: Future Tech, July 18, 2013Next